Advertise with Us
Hey.

One thing I've always been aware of is trends, and i have a lot of fun predicting them. I think being aware of trends can be very useful for online marketers.

I wanted to ask people here what cultural and domestic trends they are seeing, online, in fashion, music, design, youth culture, products etc.

Anything at all, I will probably find very interesting.

I guess I'll start with mine, and forgive me if some are naive or obvious!

Firstly, one that fascinates me in popular culture.
The "20 year trend cycle", or the "20 year rule", as it's often called. I'm sure most of you here are familiar with it.
Does anyone remember how popular 50s and 60s style music was in the 1980s? And in the 90s, so many people were into funky 70s disco music, flares (in Europe) and "retro" became the buzz word of the day.
And right now we're in the middle of an 80s revival, one that just doesn't want to die!
Anyway, my theory about the 20 year rule is that it is fast becoming the "16 year rule", as creative marketers are more and more wise to the circular nature of popular culture, and race to get ahead of trends, and exploit iconic sounds and imagery of the past, in order to be hip, and ahead of the game.

Already there are 90s references seeping into the public psyche, with "I love 90s" CDs on shelves, and things like nu-rave becoming valid, clearly defined musical genres, while clubbing in Europe is going through a sort of renaissance thanks to 90s inspired nu-rave partys, where people come out with glow sticks, childrens toys and neon face paint!

The Apple iPad. Touch screens in general
Aside from the Apple iPad, there are more and more touch screen devices coming on stream from HP, Dell and the likes. The lines between desktop computing, home entertainment, and mobile telephony are becoming increasingly blurred.

I believe some software developers will make a killing by developing applications which take advantage of the benefits of touch screen computing. Not just for your average consumer, but think of the possibilities opening up to video editors, designers, musicians, DJs, artists, and many more.
FWIW, I think the next generation of Apple iPad will include a web camera, and face recognition will be tauted as the new cool thing - where the device can be used by anyone in the family, and it will instantly adjust to their liking, with their profiles for music, software etc. 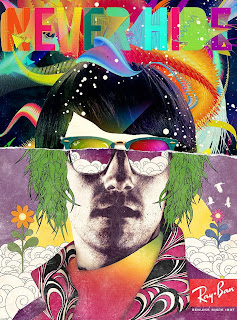 Ethnic - Africa
In the West, there are often short trends towards "ethnic" or "exotic" styles in pop culture, especially in music, but creeping into advertising etc. I think it will be Africas turn in 2010.

Viral marketing, flashmobs, art stunts.
Flashmobs are no longer the preserve of theatre groups and attention seekers. Now business and politics are getting in on the act and flashmobs are being used to promote radio stations, films, and causes.

Likewise, viral video online, and mysterious stunts in real life have been ripped out of the hands of "clever artistes" and are being used as marketing tools. Vodafone is currently running a campaign in Europe with footage of "knitting graffiti", where landmarks and public property is dressed up in wooly clothing, all completely staged of course, but still paying homage to the idea of the "art stunt".

Pseudo Eco-friendly, pseudo family-friendly, and pseudo community-aware marketing
What do you do for advertising if you're a huge oil company, or want to sell something with a dodgy reputation such as a video game console?
Sell it as being clean, healthy, and wholesome, in a really twee, hicky TV campaign, and maybe put a leaf in your logo!
There is a fairly predictable genre of music used in this sort of marketing, and usually involves either a girl with a soft voice, flourishes of flutes, a vibraphone, accordion or some other wonky cute instrument from the likes of Polyphonic Spree or Sigur Ross.
This looks set to continue in the future.

So, what do you see happening? I'm interested in any trends, be they in the home, in the media, socially, etc..

Thanks for reading. Looking forward to any replies.

#2010 #trends
(2021) Get Solo ad Traffic In Minutes! DomasG Solo Ads For Any Website! (US Only Clicks Available) by DomasG
[FREE MASTERCLASS] 5+ Years Success-Story Driven Mentoring Helps Warriors Quit Jobs & Earn From Home by Marvin Adam
View All Offers...
Launch your WSO
Advertise with Us
Advertise with Us