Advertise with Us
In December 2011 I found out about the opportunity to promote an affiliate
product that was scheduled to launch on the 12th of January 2012. I immediately
saw the potential of this particular product because the launch itself was propelled
by a unique contest.

The main objective of the contest was to bring in new leads but also allowed affiliates
To make more commissions!

What I'm about to share with you is the direct consequence of the Momentum I have
created and harnessed its power to grow from scratch, because I wanted to start out
just as a newbie, without using a list to promote to or network with others and ask them to
promote for me.

That Momentum I have created allowed me to become the 2nd top affiliate in the contest
and win one of the prizes which was a 30 minute 1-on-1 conversation with the product
creator.

Winning one of the prizes put the spotlight on me and opened the doors for me to do
joint ventures and collaborate with people like Willie Crawford, who I respect very
much and also allowed me to see the opportunities when people started contacting
me on Facebook to congratulate me.

Right now, I'm already #3 on a new contest they've launched and you can see the image
bellow, so you'll know that I'm not just making this up. 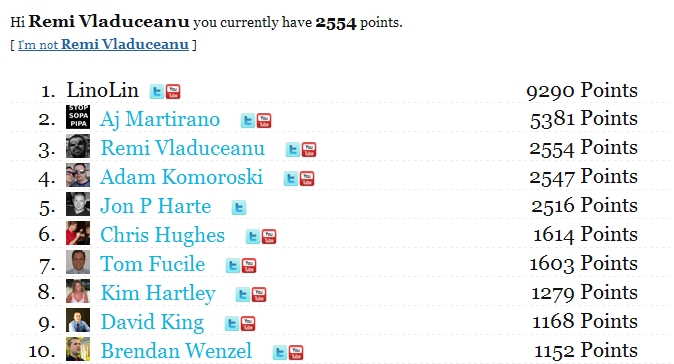 Let's see what are the 5 Steps I have taken, to create such a Momentum:

One of my biggest struggles was to concentrate on a single task at a time, and not run
around like a headless chicken, from one thing to the other. Even thought I had all the
knowledge, as I'm sure you have, I simply couldn't get my ideas together. Until one day,
when I allowed myself to succeed.

You already have all the knowledge you need! It's time to use it! Stop the 'chatter' in your
mind and focus on achieving one single task today! Then, allow yourself to move to the
next Step.

Write down on a piece of paper all your assets. Starting with social networking profiles like
Facebook, Twitter, LinkedIn or Google Plus, anything that you can use to build and develop
your online business can be used. But you need to know exactly what you can do!

Maybe you're good at writing articles, or have social skills, or maybe you're good on forums
by giving advice to others, write them all down. Those are your assets! Now that you have
all your assets written down in one place, take a step back and look at them from a global
perspective. After you've done this allow yourself to go to the next Step.

There are opportunities all over around us, we just have to be able to see them and most
importantly we have to take action on them. Take a good look at what other successful
people are doing stuff. Don't just read an email sent from 'Remi Vladuceanu' that you found
in your inbox and thought it sounds interesting enough to read it. Look at how I wrote that
subject line, how I used words to make you want to open that email!

Also, take a close look at what others are promoting. Read other people's posts on
Facebook and Twitter and try to find a way to do something similar. Now allow yourself to
follow the next Step.


Step 4. BUILD ON YOUR FOUNDATION

It's much easier to build something on your initial Momentum, however small it may be. Don't
start 5 totally different projects and jump from one project to the other without actually
accomplishing anything. Chances are that by focusing on a single project or a single task,
at some point you will see some success.

For instance, I wasn't even close to the top JVs that have banked affiliate commissions
even before the official launch of the product I mentioned earlier. But the fact that I
concentrated my efforts to drive traffic to this product and finished second on the contest
allowed me to build on top of that initial Momentum! After you have built your initial
Momentum allow yourself to apply the final Step.

I can't stress enough how important this Step really is! Without you taking action, the
Momentum fades away, never to be harnessed ever again. Make sure you make a habit for
taking action every single day, even if it's something simple as writing a single article or a
blog post, or a forum post. I like to say, take action now, today and every day!

The Law of Attraction works in mysterious ways and you never know what opportunities
you'll attract by first offering to help others without thinking on your ROI. I learned this from
Willie Crawford that once said that everything you send out to the Universe will return to
you in some form or another, sooner or later. You'll just have to be able to 'see' that return
and build another Momentum out of it!


I'm absolutely certain that my initial Momentum will allow me to easily build a minimum of
$10,000 per month recurring income in the next few weeks!

I thank you for being you, for building your 'success story' by contributing and helping
others on this amazing forum, the Warrior Forum!

If you find this useful and you'd like to know more details about what I'm planning to do the
next several weeks, you're comment are well appreciated!

To Your Recurring Momentum,

#$10 #$10000 #5 steps #build #momentum #scratch #steps
Super High ROI Amazon Affiliate Website - Build for You + Coach You to Profit + 1 Year Money Back by Verena
I'll Help You Grow Your Sales, Get Unstuck, or Get Started (100% FREE!) by Tanda Copywriting
View All Offers...
Launch your WSO
Advertise with Us
Advertise with Us