Advertise with Us
A new article on Social Media Today reports that it's unclear if Facebook's latest plan to tackle Apple's upcoming IDFA changes will work the way it's seemingly intended. Facebook launched this earlier last week, portraying itself as a hero to SMBs - but is that really the case?

[IMG]Facebook's original campaign featured full-page ads in national press publications saying the social media giant intends to 'stand up to Apple for small businesses everywhere.' The ads call for an end to Apple's changes - which are due to start in the new year. Now Facebook has upped the pace of the campaign with a second set of equally high-profile ads - and again, Facebook is portraying itself as a champion of small businesses everywhere.[/IMG] 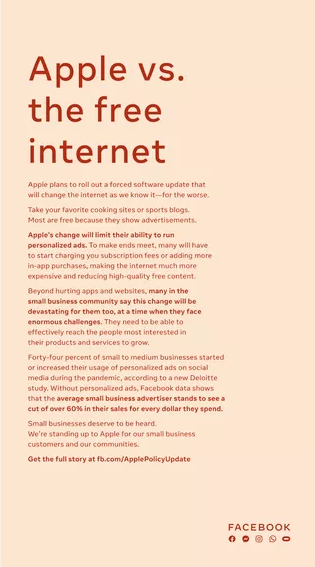 As the author of this article says, Facebook has long been criticized for inviting small businesses to build a presence on the platform and then tightening its algorithm screws over and over. The platform has done that to a point where most Facebook Business Pages are lucky to reach just a tiny fraction of the users that have chosen to like their page. Bearing that in mind, it's possibly a bit rich for the company to mention reach in that way. What do people here think? I've seen quite a bit of backlash about this, and there seem to be some very negative opinions out there regarding Facebook's stance. There's far more in the original article, including Apple's response - worth a read if you have the time!

#apple #campaign #data #facebook #launched #stage #tracking
Super High ROI Amazon Affiliate Website - Build for You + Coach You to Profit + 1 Year Money Back by Verena
I'll Help You Grow Your Sales, Get Unstuck, or Get Started (100% FREE!) by Tanda Copywriting
View All Offers...
Launch your WSO
Advertise with Us
Advertise with Us