Advertise with Us
Social Media Today reveals that, in what will be welcome news to dark mode enthusiasts, Snapchat just confirmed it's testing a new dark mode feature on a small percentage of its users, bringing the platform into line with almost every other app that already has a low light option. 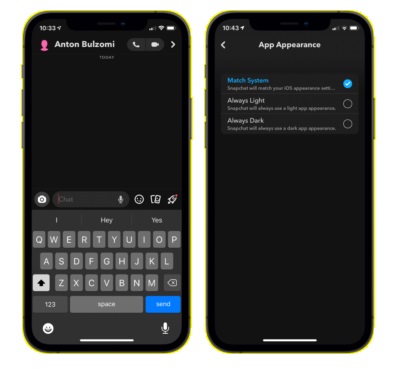 The screenshots above were shared by Appleosophy, and show a new 'App appearance' option within app settings. The feature allows you to select if you want the app to match your device settings - let's say switching to dark mode at a certain time of day, for instance - or just enter dark mode permanently when you're using Snapchat.

Discovered by Appleosophy, Snapchat has begun testing dark mode with a 'very small percentage' of users in certain demographic areas. Snapchat has confirmed the discovery of Dark Mode, with the statement 'available in a few markets.' Snapchat is one of the last popular social media applications yet to include a dark mode theme. Recently Snapchat also rolled out a simple home screen widget with the user's Snapcode. It is unknown when Dark Mode will be available for the rest of the demographic market or supported on Android.

This has only been rolled out to a selected few users for testing, so it's unlikely you'll get to see this currently. The test is a promising sign for dark mode fans, though. Snapchat is lagging behind almost every other app where dark mode is concerned after most apps made it available after recent updates to iOS 13 and Android 10. All Facebook's apps, Twitter, Pinterest, TikTok, and Reddit also have toggles for switching to dark mode already in place. This is a positive step because there are proven health benefits to be gained from using dark mode.

#dark #launched #mode #percentage #small #snapchat #users
(2021) Get Solo ad Traffic In Minutes! DomasG Solo Ads For Any Website! (US Only Clicks Available) by DomasG
[Done For You] How Would You Like An Autopilot, Profit-Producing Online Business by magdag4321
View All Offers...
Launch your WSO
Advertise with Us
Advertise with Us