Advertise with Us
About time.

Twitter has officially started the first stage of the rollout of its new tweet editing tool, with Twitter Blue members in Canada, Australia, and New Zealand now allowed to amend their tweeted text for 30 minutes after publishing, following years of demands via millions of tweets.

As you can see from this sequence, the technique is quite simple. After you've tweeted, you'll get a message telling you that you can make adjustments within the following half hour. Within that time frame, users can make up to five revisions to the original tweet.

To modify a tweet, touch the three dots menu at the upper right corner of the tweet. Then, choose 'Edit Tweet' and make the necessary modifications.

Edited tweets will then receive a new 'Edited' symbol in-stream, letting all users know that the original tweet has been updated. 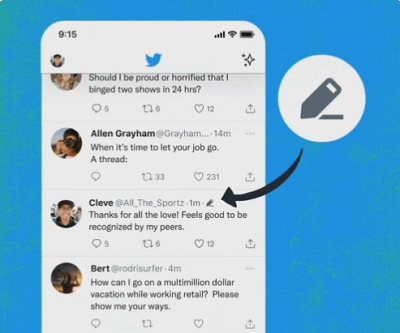 Users will also be able to view the full edit history by tapping on the 'Last edited' indicator in the tweet detail screen (i.e. the expanded tweet display that you can access by tapping on a tweet).

#editing #rolls #stage #tweet #twitter
Super High ROI Amazon Affiliate Website - Build for You + Coach You to Profit + 1 Year Money Back by Verena
Book 15-30 Sales Calls For Your Agency Or Online Business Every Month by Tanda Copywriting
View All Offers...
Launch your WSO
Advertise with Us
Advertise with Us