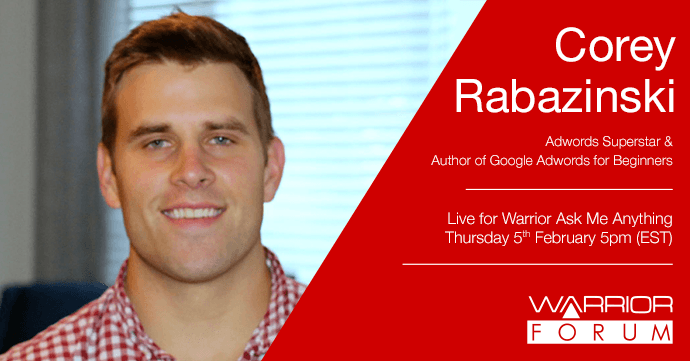 I’m Corey Rabazinski, the founder of Google AdWords for Beginners, an online course which currently has over 7,000 students. I am also the Digital Marketing Director at Code School, an education startup that was recently acquired by Pluralsight.

I will be doing a Warrior Ask Me Anything session right here on the Warrior Forum on Thursday, February 5th. I have 6+ years of experience running AdWords campaigns for large corporations like Holiday Inn and Universal Studios while at an Ad Age Top 100 digital advertising agency and freelancing. I also have in-house experience running (profitable) campaigns for a startup that consistently drove new subscriptions.

I want to share everything I know about the wonderful world of AdWords with you.

So, what questions can you ask me? Anything, really, but here's some ideas:

I am also happy to answer user acquisition questions outside of the AdWords realm. Things like:


I’ll do my best to answer whatever you throw my way. I’m looking forward to hanging out on the 6th.

#6th #adwords #beginners #corey #february #founder #friday #google #ppc #rabazinski #wama
Super High ROI Amazon Affiliate Website - Build for You + Coach You to Profit + 1 Year Money Back by Verena
Why Selling Ugly T-shirts Could Be the Fastest Way to Reach Your First $1000 Mark Online by Verena
View All Offers...
Launch your WSO
Advertise with Us
Advertise with Us